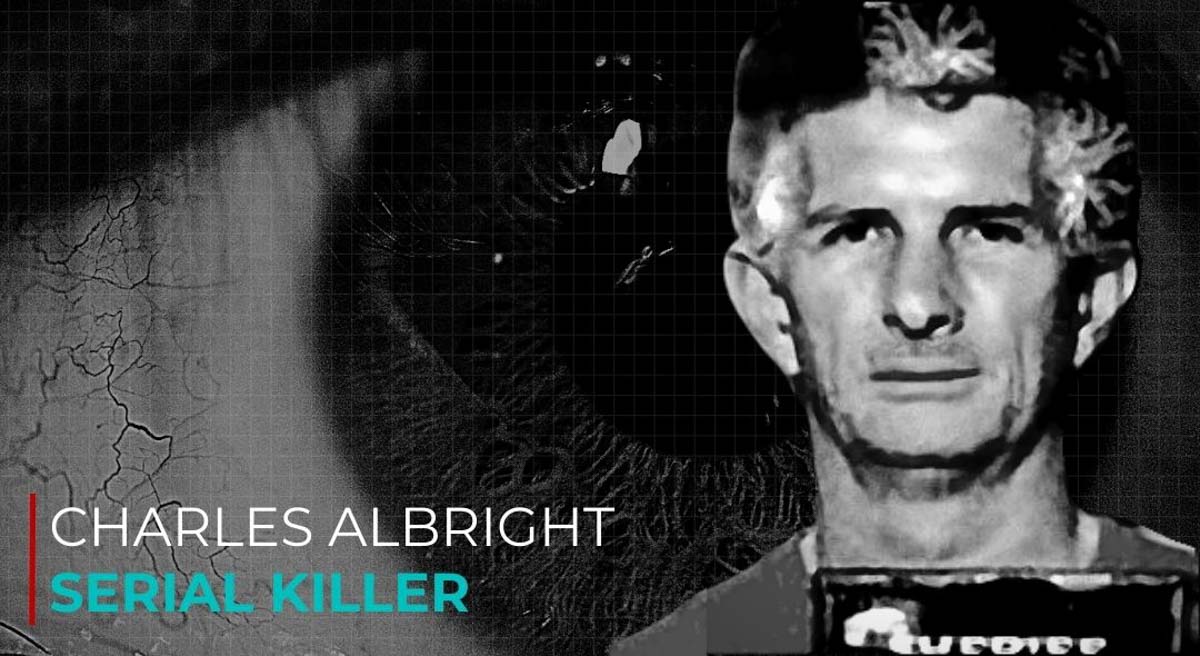 The story of Charles Albright, Serial Killer and eyeball connoisseur, shocked the nation. The killings in Dallas, Texas, were the first of their kind as no murderer had ever removed their victim’s eyes with such surgical precision.

This true crime story tells the tale of one of America’s most meticulous serial killers.

Charles Frederick Albright was born in Amarillo, Texas, on August 10, 1933. Shortly after he was born, his birth mother put him up for adoption. When he was three months old, he was adopted by Delle and Fred Albright. His adoptive parents, Fred and Delle, made sure that Charles knew he was her pride and joy. However, sometimes his adoptive mother went to extremes.

Delle Albright would make Charles wear dresses and play with dolls. When Charles was less than a year old, she locked him in a dark room to punish him for chewing on her tape measure. When he refused to nap, she would tie him down to his bed. Should would also spank him for simply not drinking his milk.

Despite her odd and often excessive punishment, she wanted Charles to succeed. With her help, he breezed through school and skipped two grades. He was a gifted boy who could do just about anything- play piano, name all the constellations, and he even tap-danced at the famous Texas Theater.

Delle also introduced Charles to taxidermy, buying him his first gun and helping him kill small animals. She even showed how to use various tools – knives for cutting the skull, spoons for scooping brains, and scalpels from cutting eyes out of their sockets.

Charles dedicated hours to perfecting his taxidermy pieces, making sure they looked as life-like as possible. Once it was time to put the finishing touch on his work, the eyes, Charles would go to his local taxidermy shop to pick out the perfect pair. He loved browsing the displays full of gleaming fake eyes and wished that he could collect them like how other boys collected marbles.

At only 13 years old, Charles Albright already had charges for petty theft and aggravated assault on his criminal record. Then he graduated from high school at 15 years old and attended North Texas University, wanting to become a medical doctor.

While attending NTU, police caught Albright carrying stolen cash, a rifle, and two handguns. This crime landed him in jail for a year, causing him to drop out of college.

After being released from jail, Charles Albright enrolled at Arkansas State Teacher’s College, majoring in pre-med studies. However, after he was found with stolen items, the college expelled him.

Albright believed he still deserved his degree despite his expulsion, so he falsified one. He created his fictitious bachelor’s and master’s degrees using stolen documents and forged signatures.

Charles Albright married and had a daughter with his college girlfriend. However, he was caught for his falsified degree while teaching at a high school and was placed on probation. He and his wife separated in 1965 and divorced in 1974.

He then received a two-year prison sentence when he was caught stealing hundreds of dollars worth of goods from a hardware store. But, he was released after serving only six months of his sentence. After his release, he befriended some of his neighbors and was eventually asked to babysit their children.

In 1981, Albright sexually molested the 14-year-old daughter of one of his neighbors. He pled guilty and received probation for this crime but later claimed he was innocent and only pled guilty to avoid a hassle.

In 1985, Albright fell in love with a woman named Dixie Austin. She was a shy widow that Albright met while traveling to Arkansas. His relationship with Dixie was one of the most romantic times of his life, taking her on classy dinner dates and charming her with stories about art and nature. Albright eventually invited his girlfriend to live with him. Soon, she supported him financially and paid all of his bills.

Albright delivered newspapers in the early morning; apparently, this was a cover-up to visit prostitutes without arousing Dixie’s suspicion. This is when Charles Frederick Albright murdered three Dallas prostitutes and transformed from an average guy into the Dallas Slasher.

Victims of the Eyeball Killer

The Eyeball Killer’s first victim was a 33-year-old prostitute named Mary Lou Pratt. She was found dead in the DeSoto city limits, just outside South Dallas, Texas. The 156-pound woman was found stripped of everything except her T-shirt and bra, which were pulled up over her breasts. Her eyes were shut, and she had severe chest and facial bruises. It can be concluded that the murderer beat her before he killed Pratt.

One of the local residents from the neighborhood where the incident occurred was so mortified by what he saw that he brought a flowered bed sheet from his house to cover the corpse.

When the Dallas police arrived on the scene, one of the officers immediately recognized Mary Pratt since she was a veteran prostitute who worked at the Star Motel in Oak Cliff. While the sex workers often called for help due to abusive clients, it was rare for one to be murdered, especially someone as well-liked as Mary.

Mary Pratt’s file was handed over to one of Dallas’s most talented investigators, John Westphalen. The murder was a “dumped body” case, one of the most complicated types to solve since the victim was killed in one location and dropped off in another. There was also no murder weapon, victims, or other forensic evidence.

Westphalen and his partner, Stan McNear, went to the office of the Dallas County medical examiner to watch Mary Pratt’s autopsy. During the autopsy, one of the pathologists noted the needle marks on Pratt’s arm and the bullet hole in her head.

But, she let out a gasp once she opened Pratt’s eyes. Both of them were missing. The eyes had been removed with such surgical precision that there was no tissue, and the upper and lower eyelids were left unobstructed.

After the shocking situation at the examiner’s office, Westphalen urgently contacted the FBI’s Violent Crimes Apprehension Program Unit. The unit stores all of the nation’s most gruesome murders on its database. However, an FBI agent reported that they had no records of anything like the murder of Mary Pratt.

Susan Peterson, another young prostitute, was dumped on the same street Mary Pratt was, outside the Dallas city limits in DeSoto. Her breasts were unveiled, and eyes shut the same way as Pratt’s, only she was shot in the back of the head, top of the head, and in the left breast.

Susan Peterson’s case was assigned to Larry Oliver, a detective who didn’t know about Pratt’s murder two months earlier. The case unfolded in the same way as the Pratt case. When Oliver visited the medical examiner, they discovered that both eyeballs were removed from the corpse.

On March 19, 1991, another prostitute named Shirley Williams was found dead, this time from the Avalon Motel, a few miles away from the Star Motel. Her body was found at six-twenty in the morning, half a block away from an elementary school in Oak Cliff. As the young students walked to school, they could see the naked corpse lying lifeless on the curb.

Investigator Westphalen was in charge of uncovering the murder of Shirley Williams. When he arrived at the Williams murder site, he directed the medical examiner’s field agent to see if the body’s eyeballs were intact. When they discovered that the body had no eyeballs, they realized they were dealing with the same killer.

During the autopsy of Shirley Williams, the medical examiner found the broken tip of an X-Acto blade embedded in her right eye socket. It was clear that the Eyeball Killer was in a rush this time. She also had a broken nose, facial bruises, and was shot in the back of the head.

However, law enforcement faced an issue with Williams’s murder. Due to the publicity of the local killings, the Eyeball Killer changed his tactics this time. His previous two victims were white sex workers from the Star Motel, but Williams was a woman from a different Motel in another city. There was no telling where he would strike again.

Charles Albright was targeted as a suspect for the killings when a woman reported to police that he and Mary Pratt were acquainted. Apparently, he was also known among the local prostitutes to have an infatuation with eyes.

After several prostitutes came forward saying that Albright had assaulted them, police had reasonable suspicion and could obtain a warrant to search his home.

Unfortunately, the gun wasn’t a match to the one used in the murders. However, they found hair consistent with Shirley Williams’s on his blankets and in his vacuum.

Based on this evidence, Charles Albright was placed under arrest. Albright was charged with all three of the Eyeball Killer murders and Rhonda Bowie’s killing, an unsolved case from 1988.

The Dallas Ripper trial began on December 2, 1991. Lacking evidence, the prosecution relied heavily on the hair evidence that linked Albright to the three murders. Though DNA evidence also linked him to Rhonda Bowie’s murder, the charge was dropped since he had an alibi.

Charles Albright was convicted of killing Shirley Williams, the last of the three murdered prostitutes, and sentenced to life in prison. His defense attempted to appeal the charge due to a lack of evidence, but it was overruled.

Charles Albright was incarcerated at the John Montford Psychiatric Unit until he died at 87 in 2020. Whether he was the real Eyeball Killer and was responsible for all three murders is still unknown. But, official sources reported that he was fascinated by the human eye until his death.

Next: read our article about David Berkowitz AKA The Son Of Sam!