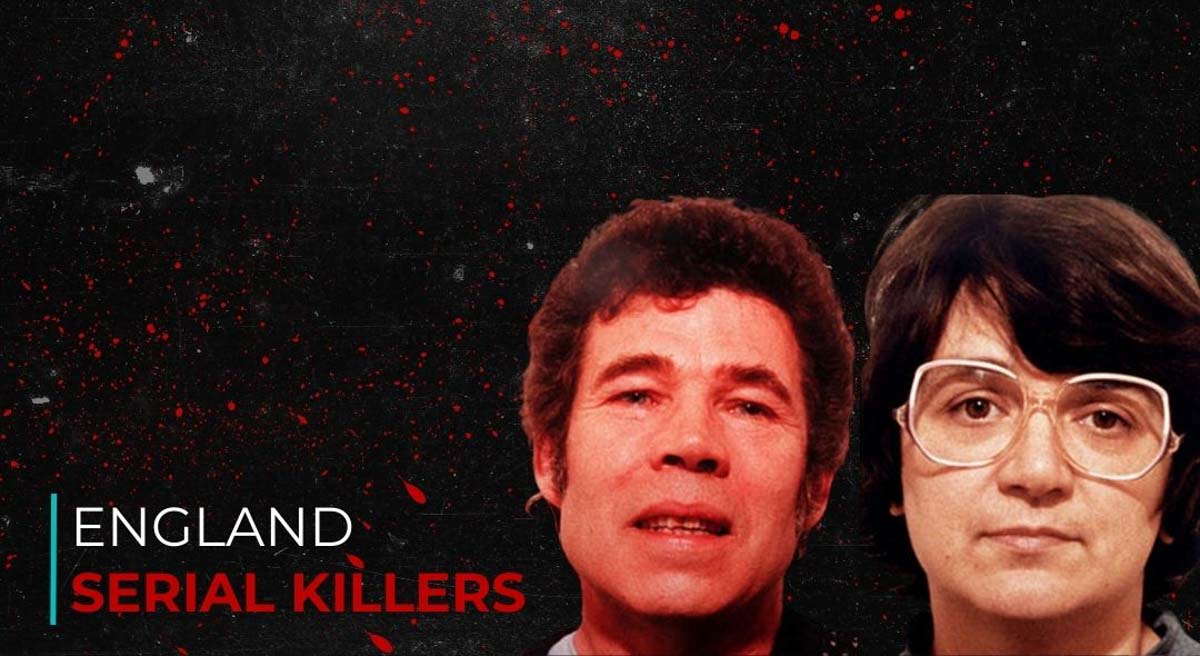 While the United States popularized the idea of the serial killer in mass media–and remains the country with the highest number of serial killers–modern English history is full of infamous serial killers who match their American counterparts in infamy, as well as depravity.

They range from career criminals to respected professionals in their field, all of whom demonstrated the cruelty human beings are capable of. Here are 13 of the most well-known English serial killers.

No killer has loomed larger in the public consciousness than Jack the Ripper. An unidentified man who stalked the streets of London’s White Chapel district, Jack would gain infamy for the mysterious murders and mutilation of five prostitutes, as well as the many letters that were sent to the police.

Most of the letters police received were believed to be hoaxes. However, the most infamous of these, the “From Hell” letter, came accompanied by a preserved human kidney.

Jack was never caught for his crimes, with speculation into his identity persisting into the present day. The deaths of five women are attributed to Jack, with the possibility of more victims.

A widow in Victorian England, and perhaps the worst serial killer on this list, Amelia Dyer would gain notoriety when an infant’s corpse was discovered in the River Thames, with evidence leading directly back to Dyer. The police discovered Dyer ran a baby farm, adopting children en masse for profit, but had begun killing the infants she adopted.

Often, Dyer would strangle the babies with white tape. At Dyer’s rate of adoption, some estimates give her upwards of 400 victims, making her one of the most prolific serial killers.

Having been placed in and out of mental asylums throughout the years, Dyer pleaded insanity. It only took four and half minutes for the jury to instead find her guilty. Dyer was hanged in the Summer of 1896. In popular culture, she would be given the name “the Ogress of Reading.”

Recalling the White Chapel Murders, Peter Sutcliffe would go down in English history as the Yorkshire Ripper. Sutcliffe would stalk and kill women and young girls he passed on the street, later opting to kill prostitutes for their vulnerability.

The search for the Yorkshire Ripper would go down as one the largest manhunts in English history, although it is more famous for its failures. Police would end up interviewing Sutcliffe nine times over five years without once considering him a primary suspect.

Sutcliffe was found guilty and sentenced to life imprisonment for the murder of 13 young women, and the attempted murders of another seven people. He would spend the last forty years of his life in prison, before dying of Covid-19 complications in late 2020.

Number of victims: At least 13

In a murder spree that would scandalize English society, Fred West killed twelve people over twenty years, with a particular predilection towards teenage girls. Most shockingly, he committed the majority of his crimes with the assistance of his wife, Rosemary.

The couple would gain infamy for their sexually-charged crimes, which included rape, imprisonment, mutilation, and murder, many of which were committed in their own home. It would be the crimes they committed against their own family that would be their downfall after Fred’s daughter told police about a tape of Fred raping her.

The investigation this launched would uncover the sexual assault and killings of Fred’s other daughters. The police would discover a number of bodies buried around the West’s home.

Fred hanged himself in prison only a few months while awaiting trial. Rosemary West was sentenced to life imprisonment and remains to this day

Number of victims: at least 12

A general practitioner based near Manchester, Harold Shipman would go down as one of the most prolific killers in modern world history. Shipman would administer lethal doses of diamorphine, usually only administered to terminal cancer patients, to hundreds of his patients. The vast majority of these victims were elderly women. Shipman would be given the moniker “Dr. Death” for his crimes.

Shipman was caught after brazenly forging a new will for one of his patients, Kathleen Grundy, which excluded her daughter and grandchildren, yet left a large sum of money for Shipman. The investigation into Grundy’s death would lead to a mass reexamination of Shipman’s deceased patients and signed death certificates, revealing his chilling pattern of drugging otherwise healthy people to their deaths.

Read Next: Who Was The Son Of Sam?

Harold Shipman later committed suicide in prison, the day before his 58th birthday. Law enforcement attributed Shipman with the deaths of roughly 250 patients.

Number of victims: more than 250

Dennis Nilsen, the Muswell Hill Murderer, remains one of the most infamous serial killers in the world. A civil servant who resided in North London, Nilsen developed a deadly pattern.

Nilsen would lure young men and boys back to his apartment–often homeless people, or other gay men he had met in bars. Nilsen would strangle or drown the men, then commence his chilling ritual: bathing and clothing the corpse, then keeping the body in his apartment for several weeks, and often sexually abused.

Nilsen was exposed after a plumber’s visit, where they discovered he had been forcing human remains down a clogged drain. Nilsen admitted his crimes to police after being confronted, confessing to the murders of fifteen men and boys. He would spend the rest of his life in prison, until May 2018 when he died of a pulmonary embolism.

Another killer who would reflect the crimes of Jack the Ripper, Steve Wright became known as the Ipswich Ripper, or the Suffolk Strangler.

A former pub manager with a gambling addiction and drinking problem, Wright would develop an obsession with sex workers in the early 2000s. Often, he would frequent brothels and professional sex workers while his partner worked her night shift.

Things came to a head in 2006, when tiny droplets of blood belonging to a murder victim were discovered in Wright’s Ford Mondeo. Much like the killer who inspired Wright’s moniker, he is formally linked with the murders of five sex workers. Although, the suspicion remains his true body count is much higher.

The perpetrators of the infamous “Moor Murders,” Ian Brady and Myra Hindley were a couple obsessed with committing “the perfect crime.”

Sexual sadists who targeted children, Brady and Hindley would lure their victims into their car or to their home before assaulting them, followed by stabbing or strangulation. For some of their crimes, the couple photographed and recorded the torture of their victim.

The two were undone when they involved Hindley’s brother-in-law, David Smith, to help them dispose of their last victim’s body. Smith, at first, agreed, before going straight to the police and confessing the crime he had witnessed.

The case was sensationalized in the press and the couple was branded as two of the evilest people in England. They would both die in prison, Hindley in 2002, Brady fifteen years later in 2017

Mary Ann Cotton is one of the earliest examples of the modern black widow, responsible for the deaths of three out of her four husbands. Ostensibly killing her husbands for the insurance money, Cotton would go another step further by killing eleven out of her thirteen children.

A serial poisoner, Cotton’s weapon of choice was arsenic, inciting a rapid decline of health in many of her family members. Her downfall came after a parish official became suspicious following the death of her son. Local newspapers realized just how many of Cotton’s family members had died of stomach fever, and law enforcement followed soon after.

The jury deliberated for 90 minutes before returning a verdict of guilty. Cotton was hanged for her crimes in 1873.

In 1950, a man named Timothy Evans was tried for the murder of his wife and daughter. Evans accused his flat neighbor John Christie of the crime, but Christie ended up the principal witness in the trial that resulted in Evans’ execution. Later, the police would find six bodies in Christie’s home: three in a kitchen alcove, two in the garden, and Christie’s own wife’s body under the floorboards.

Christie committed his murders over ten years. His method was gassing his victims, sometimes sexually assaulting them while unconscious, and always strangling them.

Christie was arrested after another tenant discovered the alcove hiding his last three victims. John Christie was executed in 1953 by Albert Pierrepoint, the same man who had executed Timothy Evans only three years earlier.

Beverly Allitt was an English serial child killer who killed four children in 1991. She began as a state enrolled nurse who worked in the children’s ward of her hospital until medical staff became suspicious at the number of children who became violently ill, all while under the care of Allitt.

Police uncovered that Allitt had staged an attack on thirteen children over a 59-day period, leading to the deaths of four. One victim was confirmed to be an intentional insulin overdose. Allitt was made to stand trial and was sentenced to life imprisonment with thirteen separate life orders, one for each victim.

Still serving a life sentence, Levi Bellfield was a serial killer and sexual predator who operated in the mid-2000s. Bellfield would often drive around in his van, approaching women and trying to lure victims, gaining the name “the Bus-Stop Stalker.”. He was motivated by sexual gratification and resentment towards female victims who rejected his attention.

Kate Sheedy was one woman who survived after Bellfield ran her over in his van. His other victims, who were often found bludgeoned in the head, did not. Bellfield was found guilty of the murder of three women and the attempted murder of Sheedy. He remains in prison to this day, serving two life sentences.

One of the most recent serial killers, Stephen Port gained notoriety as “the Grindr Killer.” Port’s method of murder was to lure men to his home over dating sites for gay/bisexual men, where he would administer GHB, a date rape drug, before sexually assaulting them.

Port’s criminal predilections took a turn when he began giving his victims lethal doses of the drug and dumping their bodies around Barking, where he lived. In his most brazen episode, Port left one of the bodies outside his own apartment and reported the body to the police himself. Even after more murders were discovered, police refused to classify the crimes as serial killings, to public outrage.

Port is confirmed to have killed four men and is linked to seven other rapes and sexual assaults. Stephen Port became a convicted murderer in 2016, serving a life sentence.