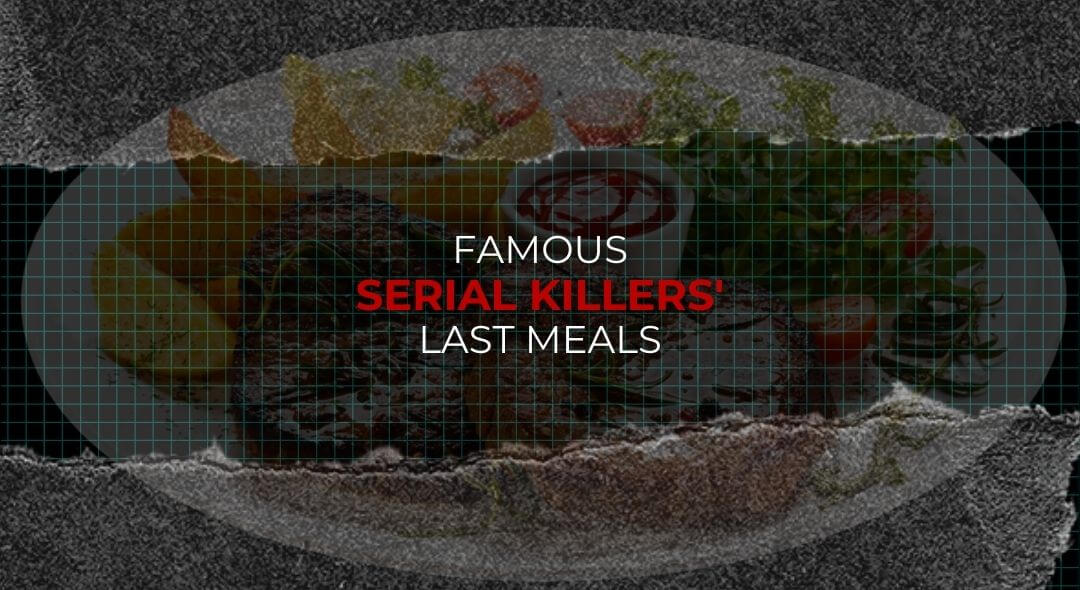 A popular question around the table at a dinner party is, what would you choose for your final meal?

While this is seen as a bit of fun to have with your dinner party guests, for many serial killers on death row, this is a reality that they need to think about.

We are continually fascinated by serial killers and want to know how their mind works, and what drives them to kill. We’re also fascinated to know what they would choose as a special last meal before death. Would you choose something extravagant or your comforting family favorite?

You’ll be surprised at some of the meal requests and demands received for the last meals of serial killers. We’ll take a look at the requests from:

Ted Bundy is one of the United States’ most notorious serial killers who raped and murdered at least 30 women in seven states, between 1971 and 1974. Some estimate that the number killed is more likely to be 100 women.

He was sentenced to the death penalty by electric chair in 1989, aged 43 years old. He was given the option of a special last meal, which he refused. The wardens served him the traditional steak dinner that included a medium-rare steak, over-easy eggs, hash browns, toast with butter, coffee, juice, and jelly.

Bundy didn’t even have a bite of the meal before being executed.

Danny Rolling was known as the Gainesville Ripper, and he murdered five students over four days in Gainesville, Florida, in 1990.

He was sentenced to death by lethal injection and was executed in 2006, aged 52 years old.

Aileen Wuornos was a prostitute who murdered seven men in Florida between 1989 and 1990. She shot the men at point-blank range and was sentenced to the death penalty.

Wuornos was portrayed in the movie ‘Monster’ by Charlize Theron and was the first woman in history to fit the FBI profile of a serial killer.

She didn’t request a special last meal before being executed by lethal injection in 2002, aged 46 years old. She ate a burger and snacks from the prison canteen instead.

She did request a cup of coffee following her meal.

William Bonin was known as the Freeway Killer and was responsible for the assault, torture, and death of at least 21 boys and young men between 1979 and 1980. His victims were hitchhikers that he targeted and picked up on the freeways of Southern California, and were aged 8 years old to 28 years old.

He was sentenced to death in 1981, aged 49 years old, and was the first person to die by lethal injection in California.

His last meal request before his 1996 execution was two pepperoni and sausage pizzas, three servings of chocolate ice cream, and three six-packs of Coca-Cola and Pepsi.

John Wayne Gacy was a serial rapist and killer who buried the bodies of his victims under his home. He was convicted of murdering 33 teenage boys and young men in Cook County, Illinois, between 1972 and 1978.

He spent 14 years on death row before being executed by lethal injection in 1994, aged 52 years old.

Gacy was a fan of fried food and was a former KFC Manager, so there’s no surprise that fried chicken and french fries were included in his final meal.

His last meal request included a dozen deep-fried shrimp, a bucket of original recipe chicken from KFC, french fries, and a pound of strawberries. It was never confirmed to Gacey if the fried chicken and french fries were actually from KFC or not.

Westley Allan Dodd was a convicted sex offender with over 50 victims he molested. He went on to kill three young boys in Vancouver, Washington.

Dodd enjoyed the attention and kept press cuttings reporting on the crimes and a diary recording his crimes. He also had photographs and clothing souvenirs from his victims.

He was arrested and sentenced to the death penalty. In a strange twist, he requested to be hung, as that’s how his last victim was killed. The authorities agreed to the hanging, and he was executed by hanging in 1993, aged 31 years old.

For his special meal, he requested a simple meal of salmon and potatoes.

Marion Albert Pruett witnessed a murder while in prison and received federal witness protection. It was while on witness protection in 1981 that he began his killing spree. He murdered five people, including his common-law wife who was bludgeoned and burned to death.

He called himself the Mad Dog Killer and said that it was his drug addiction that drove him to kill.

Pruett was convicted of murder and given the death penalty. While on death row, he tried to get the media to pay him for appearances on TV, capitalizing on his notoriety. He was put to death by lethal injection in 1999, aged 49 years old.

Timothy McVeigh was an American domestic terrorist who was responsible for the Oklahoma City bombings that took place in 1995, killing 168 people. 19 of the victims were children, and there were up to 500 people injured in the attack.

He was a decorated army veteran who had launched his private war on the United States government, taking pride in the terrorist attack.

Timothy McVeigh was given the death penalty for the killings and was executed by lethal injection in 2001, aged 33 years old.

He had only one request for his last meal, two pints of mint chocolate chip ice cream.

Thomas Grasso murdered an 87-year-old woman from who he had stolen just $12. He strangled his victim on Christmas Eve in 1990, using her own Christmas lights.

He was given the death penalty and was executed by lethal injection in 1995, aged 32 years old.

He also requested a can of SpaghettiOs, to be served at room temperature but was quoted saying that he received spaghetti instead.

Stephen Wayne Anderson escaped from prison and broke into the home of an 81-year-old woman. He shot her fatally point-blank in the face and was sitting watching TV in her home when the police arrived.

He also admitted to six contract killings and was given the death penalty. While on death row, he was famous for his poetry and even won awards. He was put to death by lethal injection in 2022, aged 48 years old.

Lawrence Russell Brewer was a white supremacist who tortured and killed a disabled black male in 1998. He was beaten and tied to a logging chain that was dragged behind a truck, killing the man and leaving his decapitated body to be found by passing citizens.

Brewer was sentenced to the death penalty and was executed by lethal injection in 2011, aged 44 years old.

Brewer ruined the last meal for inmates in Texas as they now refuse to offer a special meal because he refused to take a bite of the food.

Dennis Bagwell murdered four members of his own family, including his mother and his half-sister after his mother wouldn’t give him any money.

He was sentenced to the death penalty and was executed by lethal injection in 2005, aged 41 years old.

As you can see, there are some weird and wonderful requests made for the last meal from death row inmates waiting to be executed.

The majority of all requests are granted no matter how bizarre they appear. However, some restrictions are dependent on the state, such as cost, availability, etc.

The famous last meals of serial killers vary dramatically from a glass of water, a single olive, to lobster and chocolate chip ice cream.

What would you choose?

The Son Of Sam