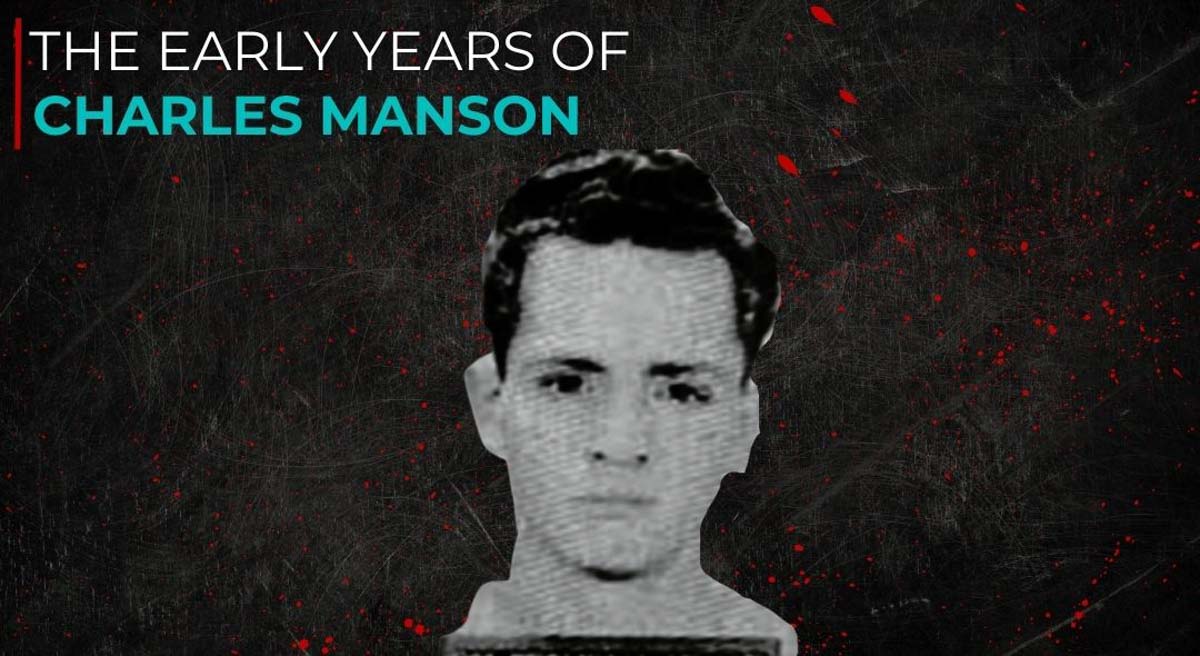 Charles Manson is one of the most infamous criminals in American history. But before he was a powerful cult leader who convinced the Manson Family to ruthlessly murder actress Sharon Tate and her friends- young Charles Manson had a troubling upbringing that led to his life of crime as he got older.

The Birth of Charles Manson

Charles Manson was born to a 16-year-old mother on November 12, 1934, in Cincinnati, Ohio. He was called “no name Maddox” until he was a couple of weeks old, then his name was changed to Charles Milles Manson. His father, Colonel Walker Henderson Scott Sr., was in the army. When Kathleen told him she was expecting, he left and never returned, making it likely that Manson never met his biological father.

Charles’ last name came from a man his mother Kathleen married named William Eugene Manson when Charles was under a year old. William was an alcoholic and would go on benders for days at a time. The two divorced after three years of marriage in 1937.

Charlie’s Mother, Kathleen, had a very religious upbringing. Her mother was a devout member of the Nazarene church, but Kathleen disobeyed the teachings they preached.

When she grew older, she became a heavy drinker. She would often go missing for days, leaving young Charles alone to fend for himself or with various babysitters while she was at the bar and hanging out with different men. In 1939, Kathleen committed robbery with her brother Luther, landing her a 10-year prison sentence. Charles lived with his aunt and uncle until she was granted parole in 1942.

One of Charles’ first childhood memories was visiting his mom in West Virginia state prison- which had the architecture of an old medieval castle. Charles was forced to visit his mom for years while she was locked up. He could only talk to her with thick glass in between them while she sat next to rapists and murderers.

While Charles’ mother was incarcerated, he lived with his aunt Glenna, uncle Bill, and their daughter, Jo Ann. The family resided a few miles from the West Virginia state prison, where Kathleen served her time.

Charlie caused nothing but trouble when he lived at his aunt and uncle’s house. He constantly lied, blamed others for his wrongdoings, and deliberately misbehaved to be the center of attention. He missed his mother terribly while living with his aunt and uncle. Charlie hoped to spend the Christmas of 1947 with his mother but found himself stuck spending it with the Thomas’ again.

Read Next: What Did Rodney Alcala’s Father Do To Him?

When he was 13, he stole his uncle bill’s gun. While it’s unclear why he stole the firearm and what he was planning to do with it, he was a fairly experienced thief at this age. Fortunately, Bill recovered his gun from Charlie before he used it.

When Charles was home alone with his aunt and uncle’s daughter, Jo Ann, she told him to go play outside while she changed the bed linens. But, the estranged child soon returned, waving a razor-sharp sickle in his cousin’s face.

Being stronger than her scrawny cousin, Jo Ann shoved him out of the way and continued making the bed. Charlie jumped between her and the bed, in which Jo Ann pushed him outside and locked the door.

Charles began slashing the screen door with the sickle with a crazy look on his face. Jo Ann was convinced that he was going to kill her. Once he cut through the screen and began prying the door open, Bill and Glenna Thomas drove up to the house.

Once they saw the sliced-up screen door, Jo Ann’s ghostly face, and Charles’ raging red face, they demanded to know what happened. Jo Ann was so traumatized by her cousin’s actions that she could barely speak but managed to utter, “Ask Charles.”

Charlie proceeded to tell his aunt and uncle that Jo Ann attacked him and he was protecting himself. Of course, they didn’t believe him and gave Charles a whipping.

Charlie Manson as a Child

According to those who knew Manson as a child, he also had difficulty at school.

In first grade, he was put in a classroom with a teacher with a notoriously strict reputation. She ran her class like a prison and placed her students based on what she determined to be their intelligence level. The kids she thought were bright were placed in the front of the classroom, then there were kids in the middle, and kids that she thought were dumb were in the back- which is where she put Charlie.

Charles ran home with tears streaming down his face after his first day of school. However, his uncle lacked sympathy and was horrified that he was crying in the first place. Charles’ cousin Jo Ann recalls her father, Bill, forcing him to wear a dress to school the following day.

Charlie showed disturbing signs of the violent and manipulative cult leader he would become when he was in elementary school. He would recruit gullible classmates, mostly girls, to beat up students he disliked.

When the school staff caught him, he’d swear that his kid followers were doing it out of their own will and that they couldn’t hold him responsible for the other students’ actions. Charlie often got off scot-free as his followers were punished as the staff didn’t believe that a six-year-old could manipulate other students the way he did.

Charlie didn’t just develop an interest in violence- he also had a passion for music at an early age.

As a young boy, he was often found playing his aunt and uncle’s old upright piano. With practice, Manson grew to be a very talented musician early on in life, picking up on how to play popular music during the time.

However, his musical talents would later draw many of the Manson Family members into his murderous cult. They loved listening to the singer-songwriter perform his melodic folk music. Some even speculate that his inability to make a career as a musician is one of the factors that pushed mansion into committing horrific acts of violence.

When Kathleen got back custody of her son, she continued her neglectful parenting habits. However, as Charlie grew older, he found himself having run-ins with the law and was arrested multiple times. Desperate to get her son to clean up his act, his mother sent him away to Gibault in Terre Haute, Indiana. The boarding school was run by Catholic priests and for juvenile delinquents such as Charles.

Life at Gibault wasn’t much better for young Charles Manson. The priests who ran the school would give him daily beatings for wetting his bed, and the other boys would often pick on him.

According to Manson, his mother visited him on occasion, and when she did, she always promised that they would be together again soon. But, Manson got tired of waiting around at the boarding school and ran away to his mother’s house. She sent him back the following day, and Manson never lived with her again.

Read Next: The 13 Most Famous Serial Killers In England

Charlie figured that he was sent away again because his mother couldn’t handle his reckless behavior, so he decided to escape once more. This time he fended for himself, surviving off of meals he begged for from other people. When he made it to Indianapolis, he would commit petty larceny and steal money from cash registers to afford to rent a room to live in.

He later wrote about the experience with his mother, “I was bitter, and I knew real hate.”

At 14, Charles was sent to Boys Town in Omaha, Nebraska, after he was caught for a string of robberies. The facility was a well-known home, which gave troubled youth a fresh start.

After spending only four days at the home, he and a fellow student named Blackie Nelson got ahold of a gun and a car. They used the stolen car and gun to commit two armed robberies while on their way to see Neilson’s uncle in Peoria, Illinois.

Nielson’s uncle was a professional thief and allegedly took the two boys on as his apprentices. Manson and Nielson committed more armed robberies- this time, he seemed to be doing it for fun rather than to survive.

It was clear that the young boy was heading towards a more serious life of crime and would possibly even commit murder. When he was caught again, the Peoria judge that overheard his case wasn’t so forgiving. He sent Charlie to a reform school in Plainsfield, Indiana, where the adult supervisors were basically drill sergeants.

Life Up Until the Tate Labianca Murders

The rest of his youth is a similar story- committing robberies, getting caught, and eventually landing some prison time. Then, in the 1960s, he committed mass murder by sending members of the Manson Family to kill the pregnant actress Tate Labianca and her friends.

Even though he never killed anyone himself, he was charged with first-degree murder and received a life sentence, spending the rest of his days behind bars until he died at 84 years old.